You Are Here: Fundamental research of spray-oil film interaction 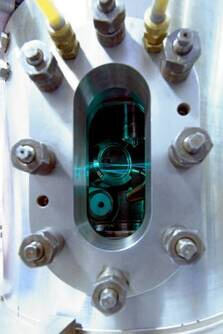 During pre- and post-injections in direct injecting diesel engines, spray impingement on to the cylinder liner is likely to occur, leading to fuel deposits on the liner. At the same time oil from the cylinder liner is transported into the combustion chamber, which may increase the production of pollutants. Due to the movement of the piston, the fuel contaminates the oil-circuit of the engine, resulting in a reduction of viscosity and lubricity.
The goal of this research project is to experimentally investigate the interaction between a diesel spray and the oil film under conditions similar to those in a post-injection (fig. 1).

The approach of investigation can be divided into two steps.